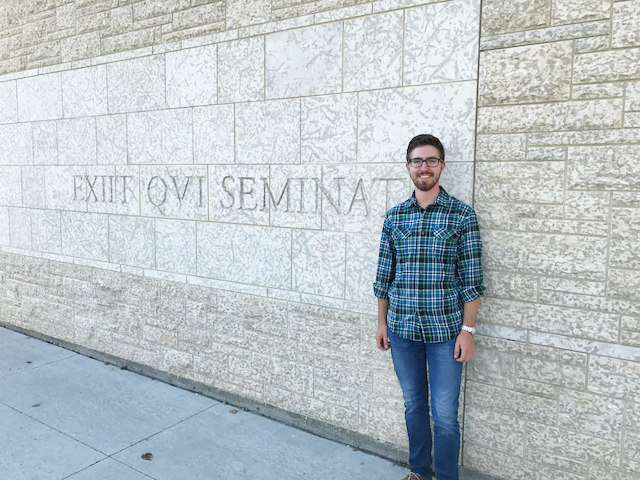 Trombone, bagpipes, French horn, trumpet, and tuba — these are but a few of the instruments Kevin Ponte knows how to play. The St. Michael’s parishioner is a music prodigy of sorts. His talent has afforded opportunities such as playing bagpipes in The Calgary Stampede and for Queen Elizabeth as she entered Canada House in London, England.

At 19, Ponte was featured in the Calgary Herald for his musical ingenuity. He was heralded as an emerging composer for a piece he wrote that was performed by the Calgary Youth Wind Ensemble.

Ponte has a history of exceeding people’s expectations for his age. You would never guess that he is only 22-years-old. In the words of Shakespeare, the world is one’s oyster for this poised, articulate, courteous, gifted yet down-to-earth young man.

With a letter of acceptance to a masters program in conducting at an American university in one hand and an application to the seminary in the other, you can imagine the difficult decision Ponte had before him.

He chose the road less traveled.

Today, he is one of 11 seminarians for the Diocese of Calgary. He’s in his first of seven years of study at St. Joseph’s Seminary in Edmonton. And so far, so good.

“It’s been a wild ride, but it’s been a very joyful ride. I’m very happy with where I’m at now,” said the University of Calgary music degree graduate.

Kevin wasn’t always a practicing Catholic. In fact, his return to the Church was rather recent.

“I went to St. Peter’s. It was Wednesday, Dec. 23, 2015. I still remember the date. I knelt behind the screen and said ‘bless me, Father, for I have sinned. It has been 12 years since my last confession.

“I was expecting to hear ‘Get out! You’ve been gone too long. No forgiveness for you.’ But instead on the other side of the screen, it was: ‘Right on brother, welcome home. What’s been weighing heavy on your heart?

“That was really comforting at that moment. Just this mercy washing over me. I’ll never forget that experience.”

To this day, Ponte isn’t aware if Fr. Jerome Lavigne knows that confession played a pivotal role in his return to the Catholic faith.

Ponte and his year-and-a-half older sister were raised Catholic. His first seven years were spent attending St. James Church, until his family moved parishes to St. Michael’s, where his parents still attend. At 13, his mom was diagnosed with breast cancer and, with his father working in Texas at the time, it was difficult during that time to continue going to church so the family took a pause. Then in high school, he stopped believing in God altogether. It wasn’t until his university days when he attended an Extraordinary Form of the Mass for the first time.

“I was blown away by the beauty and regal ceremony of the liturgy, and I was really captivated by the person of the priest; how precise and reverent he was while at the altar and during Mass,” said Ponte. It was the catalyst for him to start learning about the Catholic faith.

In his quest for truth, he studied all the major world religions at university, which helped him narrow down his search to Christianity and, specifically, Catholicism. He was living in two worlds for a while – going to church each Sunday, yet still being content with who he was before his reversion.

Another piece of the puzzle was making genuine friendships. In his last year of university, he got involved with a campus ministry called Catholic Christian Outreach. He took a six-week discovery faith study which is based on a clear and concise presentation of the gospel message, the kerygma.

“I joke and call it my safe space on campus. It’s where I could go and be with these like-minded people,” said Ponte. “The friendships I have now are so much more authentic. They were all superficial before. Everyone is presenting themselves, so they are well-liked and popular. It was refreshing to go to CCO and be myself and be accepted for that.”

As a child, he’d always been drawn to service professions: police officer, firefighter, soldier. At 16, he joined the army reserves.

“Through my study of Catholicism, I was really attracted to the role of the priest in the community — what he does, what he offers to the people…this life of service.

“During the course of university, I asked what’s the best way to be of service to God and his people. I took that to prayer and it kept coming back – priesthood, priesthood, maybe you’re called to the priesthood.”

But Ponte dismissed the idea, thinking he was too new to the faith and too terrible a sinner. This thinking changed over a cup of coffee with the former associate pastor of St. Michael’s. Ponte shared his story with Fr. Cristino Bouvette and they began meeting regularly for spiritual direction.

When Ponte realized he may, in fact, have a calling to the priesthood and wanted to pursue it, his parents were initially concerned. Bouvette met Ponte’s parents on a few occasions and he was quick to put their minds at ease.

“He said my parents felt the same way, you are not the first people who have had their son go off to seminary and you won’t be the last. There are ways to cope, I suppose…it was a tough experience to go through for a few months, but we are stronger as a family now.”

The bonds Ponte has made during his first year of seminary with the 15 other seminarians from across Western Canada has a family-like quality.

“It can be hard to get along with everybody when you are with the same people 24/7, but we all get along really well. We address each other as brothers now.”

Ponte has a few words of advice for young people: “Don’t be afraid to take a leap. If you feel a door is being opened to you, you owe it to yourself to at least step in and look around.”

He also has some advice for St. Michael’s parishioners and Catholics in general: “Don’t be afraid to encourage young men and women to explore the possibility of religious life. I think that was beneficial to me. I wish I would have heard it earlier.”