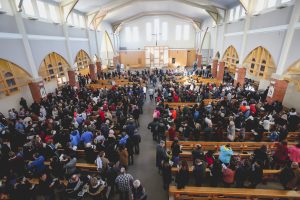 Close to ten thousand Alberta Catholics venerated the relic of St. Francis Xavier during its two stops in Calgary for the cross-Canada relic pilgrimage. Ryan Factura/Diocese of Calgary

With files from Ryan Factura

Over 5,000 people made a pilgrimage to St. Albert the Great Parish in southeast Calgary for the public veneration of the relic of St. Francis Xavier Sunday, Jan. 1, 2018, before heading to St. Michael Catholic Community the following Monday.

Nearly 2,500 attended Sunday Mass at the church in the presence of the incorrupt arm of the saint, on a special tour marking Canada’s sesquicentennial celebrations. An additional 200 more visitors waited patiently in a line overflowing into the basement as evening vespers prayers with the relic after mass.

“What an opportunity and entry point to talk about our faith. It’s one thing to read about St Francis in a book, or hear about him in a talk but to actually see the 3D flesh and hand of St. Francis, that’s something that goes deeper in your understanding of what it means to be saint,” said Sara Francis, a wife and mother of four living in Calgary.

Pilgrims touch the relic with religious items such as prayer cards and rosaries. In Catholicism, objects that come in contact with first-class relics become third-class relics.

She continued, “It’s really exciting to see a real-life example of a saint, and hopefully he can help us on our mission as a family to be saints just like him in our own way.”

The right hand and forearm is normally kept in Rome at the Church of the Gesù. As the arm is incorrupt, the flesh of the saint has not decayed at a natural rate since his death in 1552 in Toishan, China, near Hong Kong. The church is the home of the Jesuits, an order founded by seven members, including St. Francis Xavier, St. Ignatius of Loyola, and St. Peter Faber.

For Calgary’s Bishop William McGrattan, the Jesuit spirituality has shaped him in his call to priesthood and as an educator, “I really benefitted in my own life, and as a bishop, entering into Ignatian retreats.”

McGrattan was grateful that the Diocese of Calgary was able to host the relic for two days, and also impressed by the public interest of the relic.

He said, “The large number of people here speaks to the fact that this is something important to them,” he praised the pilgrims who have traveled to the church. “They made the effort to come out, they made the effort to venerate the relic. All of us are called in our lives to emulate the saints, like St. Francis Xavier to have that spirit of missionary zeal, of outreach and witnessing to our life of faith.”

Most Rev. William McGrattan, Bishop of Calgary, at the public veneration Sunday, Jan. 21 at St. Albert the Great.

St. Francis Xavier is considered by many to be the greatest Roman Catholic missionary of modern times, in the establishment of Christianity in India, Malaysia, Southern China, and Japan. A part of the Jesuit history in Japan was recently highlighted in Martin Scorcese’s film, Silence.

His Excellency also linked the mission of St. Francis Xavier in Sunday’s Scripture readings in his homily to those present for Mass, “I invite the whole diocese to ask of that grace of a missionary heart, to allow that missionary impulse to be found within our parishes and within our diocese.”

During the Canadian tour, the arm was placed in two Plexiglas cases, and accompanied at all times by a guardian of the relic. D’Arcy Murphy is the guardian on the 15-city tour across the country.

CCO missionary D’Arcy Murphy, guardian of the relic, cleans the glass case before media were allowed to photograph the relic up close.

“For Catholics, it’s an opportunity to have a physical manifestation of a deeper spiritual reality,” Murphy stated. “The saints are in heaven right now and continuing their ministry in praying for us here on Earth.”

Dynae Stamp, a pilgrim from Enchant, Alta., took the once-in-a-lifetime opportunity to come with her family, “I’m so thankful that St. Francis Xavier’s relic was able to come to Calgary and across Canada, and I have no doubts that the fruit will be powerful in our country.”

Angéle Regnier, foundress of Catholic Christian Outreach 30 years ago in Saskatoon with her husband André, was also present on Sunday. She said that the organization had brought the relic to Canada on the faith that God, through the generosity of donors, would provide the means of paying for the tour of the relic.

Regnier mentioned that there were three graces which are received by the encounter with the relic: conversion of souls, the raising up of missionary disciples, and healing.

“St. Francis Xavier during his life on earth was known for his gift of healing.” The healing continues, according to Murphy, “There’s been a number of people we’ve actually heard from just in the last couple of weeks during this tour who have spoken to us of healings they have experienced – either physical ailments, or emotional and spiritual afflictions, that they’ve actually felt lifted from them. There’s been a whole host of those kind of instances.”

The following Monday, Jan. 22, over 4,700 people came through the doors of St. Michael Catholic Community where the second and last public veneration in Calgary was held. That figure was significantly higher than what Fr. John Nemanic expected.

It was an assumption that most of the people making this pilgrimage would go to St. Albert the Great, since the allotted time was much longer and included Mass with the bishop. The fact that the attendance for both events are not too far apart says a lot about the significance of this relic pilgrimage among Catholics in Alberta.

With the relic making its way across the country, it hasn’t been without some question about whether pilgrims are worshipping or venerating St. Francis. Fr John O’Brien, SJ, is accompanying the relic on its Western Canada tour representing the Society of Jesus.

O’Brien distinguishes the difference, “Worship is something that Catholics and Christians reserve for God alone in his holiness, such as the Eucharist and in other forms of prayer towards God. We venerate relics which is to say that we give them respect, because we believe that occasions of prayer. That through their very tangibility, they are in a sense a link between heaven and earth in a communion of saints.” He states also, “it’s nothing new, it’s an instinct in Catholics not just in the early church, but you see it in Scripture between the Old and New Testaments.”

The relic finished its Alberta leg on Monday in Calgary. It will travel in its own seat aboard Air Canada, with its final stops in Vancouver, Victoria, Montréal, and Ottawa. From there, it will return to Rome, Italy.