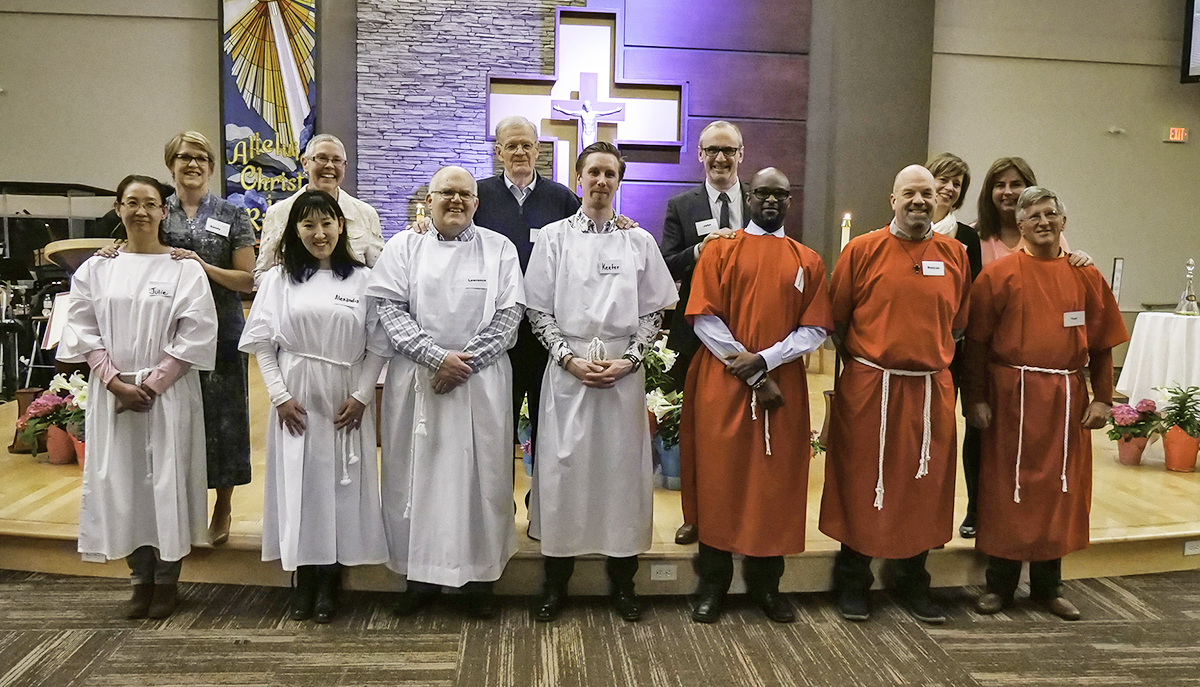 Alexandra and Lawrence Fisher (second and third from left) during the Easter Vigil Mass.

When five-year-old Patrick Fisher was baptized last May, it prompted his parents Lawrence and Alexandra to consider their own baptismal call.

Their interest in Catholicism grew as they prepared their son for his baptism. The couple felt the best way to support Patrick in his faith life would be to join him in his journey, so they enrolled in St. Michael’s Rite of Christian Initiation for Adult program that following September.

“I was increasingly concerned with what seems to be an attack on Judeo-Christian values in our basic culture. I think I’d taken my Christianity for granted for many years and it started to increasingly gnaw on me,” said Lawrence Fisher. “My wife and I decided we needed to raise our son in a Christian and especially Catholic life.”

The Fishers were among the four catechumens and three candidates to join the Church at St. Michael’s Easter Vigil in April. “It was a surreal experience. It blew my expectations,” said Lawrence.

He felt a connection with St. Michael’s from the moment he walked in to register his son for baptism a year and a half ago.

“The minute I walked into St. Michael’s there was a comfort level. It’s just a very welcoming place. As we started to attend Mass on Sunday and meet more people –– it’s just a wonderful, wonderful church.”

The nine-person RCIA team plays a pivotal role in creating a sense of welcome for newcomers.

“I love them like I love my own children,” said Sandy Leia, St. Michael’s RCIA coordinator. “I’m a cradle Catholic, but I experienced deep conversion 15 years ago. That made me want to help people fall in love with Christ and His Church…(coordinating RCIA) is definitely a calling. I feel I’m exactly where I’m supposed to be.”

The RCIA team journeys with the catechumens and candidates through increasing levels of commitment. Leia uses a relationship analogy to describe the RCIA journey – moving from a dating relationship, to engagement and then marriage at the Easter Vigil when they join the Church.

From September to Pentecost, the group met at St. Michael’s every Thursday at 7 p.m. This year, the meetings have been open to any parishioner interested in refreshing their knowledge of the Catholic faith. Among those who audited the course, one person received the sacrament of Reconciliation after a 10-year hiatus.

New this year, when someone inquires about RCIA at any point in the year, they will be guided into an appropriate parish program or ministry to suit their needs until the RCIA begins in the fall. And for the first time, participants did a six-week Discovery Faith Study during the initial inquiry phase in the fall. It’s a resource designed by the Ottawa-based lay movement Catholic Christian Outreach to help people develop a personal relationship with Christ. For Lawrence, the turning point in his faith journey was the lesson about the return of the Prodigal Son.

“For me that was where it went to the next level. It wasn’t just a theoretical journey. That was where the heart connected with the theory.”

The final phase of the official RCIA program is bittersweet for the Fisher family. The team members “are just tremendous people. In a way, it’s almost going to be a little sad that the program is over. You really get connected when you are spending that quality time with people,” said Lawrence.

Easter isn’t the destination – it’s the launching point, said Leia. The group is invited to take Growth, a six-week CCO faith study, to keep the momentum going through the summer and help deepen their life of faith. Once the program starts back up in the fall, all are welcome to attend.